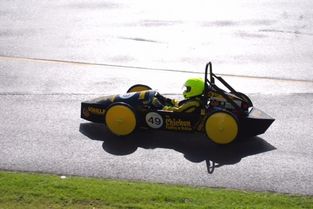 BAL Group has recently used their knowledge of aluminium heatsinks to the benefit of Bromsgrove School, a private coeducational day and boarding school for children 7-18.

Pupils from the school recently competed in the IET Formula 24, run by Greenpower Education Trust, which promotes sustainable engineering to young people through practical and educational engineering challenges

“Team Chicken” as the Bromsgrove School team are known, entered the IET Formula 24 which is designed for those aged between 11 and 16 years old.

The competition requires entrants to design, build and then race an electric car, competing in regional heats at major motor circuits in the UK.  In order to qualify for the International Final at Rockingham Motor Speedway a team must finish in the top three to automatically go through.

All teams have the same motor and one pair of 12 volt batteries per race. During the race at least three team members must drive the car, and up to six further members can act as pit crew. Drivers may only drive for one car and for one team and each driver must drive for a minimum of 15 minutes.

Other than the motor and batteries entrants are free to design a car from their own imagination, or build one of the fantastic kit cars. All cars must follow a set of strict regulations which still allow for an amazing variety of designs.

As Aled Luckman, Team Manager for Bromsgrove School Greenpower race team explains, “The car can travel up to 30mph, but any fool can drive fast. Winning comes from the teams that travel the furthest distance with no change of battery or charge. “

“This requires a real feat of engineering both mechanical and electrical. The car has to be as aerodynamic as possible, with a motor running as efficiently as possible.  The team need to gather test and real time data to monitor and improve performance. Also we need to balance power to weight ratios to hit the furthest distance possible.”

“To do this, we ended up developing numerous innovative advancements including new aerofoils, a novel heat sink and vital monitor and control systems.”

Bromsgrove School approached BAL Group as they had heard of their expertise in the design and manufacture of aluminium heatsinks producing efficient designs to match customer’s thermal requirements.

Team Chicken was having problems keeping the motor of their Kitcar cool during a race and worked with BAL Group to produce a lightweight, space saving and efficient solution.

As Mr Broadbent of Bromsgrove School said, “The heat sink that you have made for us is extremely successful.  Whereas before we couldn’t touch the motor after a race because it was scalding hot, this time after the race it was so cool I reckon my hands were warmer in temperature…”

After an amazing season, winning six trophies in four races 'The Chicken' Kitcar team qualified for the International Finals over the weekend of 15th and 16th October 2016 with teams travelling in from as far away as Brazil, USA, Poland, Ireland, Scotland, Portugal and South Africa.

The team narrowly missed out on a podium position in the Kitcar finals by ¾ of a mile in distance, but were undeterred going in to the F24 World Finals the next day, racing against eighty other teams.

The Bromsgrove team finished a respectable 27th overall and were the second placed Kitcar, ensuring a place on the podium.

Mr Broadbent concludes, “Team Chicken has had an amazing season this year. We would like to thank our sponsors Gorilla Glue, Trumeter, Digital Speedos, Bay Plastics and especially BAL Group, Julian Cavalot, for designing and manufacturing the most amazing heatsink ever - after the 2nd race the motor was almost cold!”