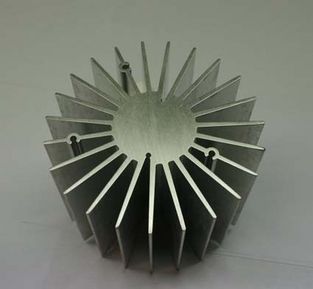 An LED lighting company approached a leading Scandinavian aluminium extruder to discuss a new project for radial fin heatsinks to cool a range of downlighters for use in high bay warehousing and offices.

Calculations and designs were subsequently carried out by the extruder and after three months the results were presented to the lighting company.  The customer was advised an aluminium heat sink which was 120mm diameter and 250mm long was required to cool the LEDs.

At this point the customer expressed concern that the heatsink was being over-engineered which would prevent him from launching his product.   The high value of aluminium used in the heatsink made the product cost prohibitive and the dimensions of the heatsink meant the product would not be viable due to its size.

As a result of his concerns the customer approached BAL Group for a solution.  Within 48 hours BAL had offered a standard radial fin heasink cut at 120mm x 40mm.

Understandably the customer was cautious as the gulf between the two design proposals was so great.  Would BAL Group’s design meet his performance requirements when he had been advised he needed a much larger heasink?

Consequently he visited BAL Group premises in Birmingham.   The LEDs to be used in the project were put on test during the meeting.  A thermal imaging cameral was used to show that the heatflow from the aluminium heatsink was within the parameters necessary for the application which proved that the design was suitable in terms of performance requirements.

As a result of BAL Groups design solution for the LED heatsink the project was now viable in terms of size and also cost and could go ahead.